Today, the White Sox released a webpage that will allow fans to share their support for Liam Hendriks as he continues his battle with Non-Hodgkin Lymphoma.

The webpage, called “Team Liam” will allow fans to submit custom messages, art, videos, and other forms of support to be shared both with Hendriks and on social media.

On the website is the following message from the team:

“Send Your Support to Liam Hendriks!

Liam Hendriks and his wife Kristi are always there for others. It’s time to be there for them and show our support as they “Close Out Cancer!”

We want them to hear from you directly. Submit your own message of support for Liam and Kristi as he fights non-Hodgkin lymphoma. Share your own words, videos, artwork and other messages of support.

Your messages may be featured on social media or in a video. For video submissions, please video landscape (horizontal) for best quality.”

Upon going to the website, which can be found here, there is a form for fans to fill out, along with the ability to upload some form of media that will be shared.

The Australian closer has been rock solid for the White Sox over his two years as the team’s closer. More importantly than that, however, Hendriks has been a leader in the clubhouse and in the Chicago community. Hendriks’ South Slydah Society is the most well-known way, however, he and his family have been outspoken supporters of the LGTBQ+ community and have spoken out against gun violence in Chicago. He has also partnered with organizations focused on animal welfare, including Tony La Russa’s Animal Rescue Foundation, One Tail at a Time, Fetching Tails Foundation, Mission K-9, the Petco Foundation, and the Rescue Me Thursday campaign.

The White Sox have previously mentioned that they don’t plan to share any further updates on Hendriks’ status until Opening Day.

Make sure to take a few minutes to share your support for Hendriks!

Any updates on how our closer #31💚 Liam is doing…..wishing him all the best

Liam – Know you will get through this with the same fierceness you face on the mound. Your kindness, heart and generosity makes me smile. Thanks for all you do and can’t wait to see you back at Sox Park – (I may even upgrade my tickets to see you up close and not from the outfield!) Prayers and only good thoughts to you and Kristi. We loved your visit to OEMC. You are a true good person. Keep fighting! Hugs & well wishes. Hope this photo brings a chuckle!! 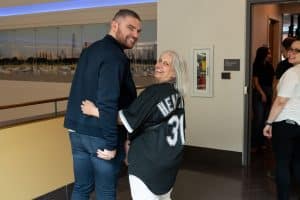 Watching channel 7 tonite they mention Team Liam….funny I was wondering how my favorite closer is doing…..praying for you Liam you got this your fans are rooting for you Can’t wait to see you back on the mound…#31 we love you

I joined Sox On 35th from Ireland back in 2017 and now serve as the Editor-in-Chief for this incredible page. I’m a 2019 graduate from the University of Notre Dame with degrees in Applied Mathematics and Economics. This, along with being a 3x #SoxMath Finals Runner-Up, is likely why I've been given the title of "resident nerd" of the page. I look forward to bringing you analytical and thought-provoking content for years to come. Go Sox!

Jason Benetti discusses his return to the...